Civic Center Acreage to be Developed

Our flyer states that 14 acres are to be given over for commercial and residential development.  Some have asked where we got that number.  Michael was sure it was at the city staff presentation, but it doesn't show up in the minutes.  Some other things that were discussed at the meeting are also not in the minutes, which was not recorded.  So, Michael measured it and it comes to a bit over 14 acres, 14.64 acres.  Here's how he did it - you can do the same and check.

First, we see the current aerial view with the relevant areas marked off and labeled to 2 decimal accuracy.  This is provided by the Sunnyvale City staff on pages 19-21 of their PDF document which was presented as a PowerPoint presentation to the City Council:
http://sunnyvale.ca.gov/Portals/0/Sunnyvale/LIB/doc/Library%20Study%20Session%20Final%20073112rf.pdf 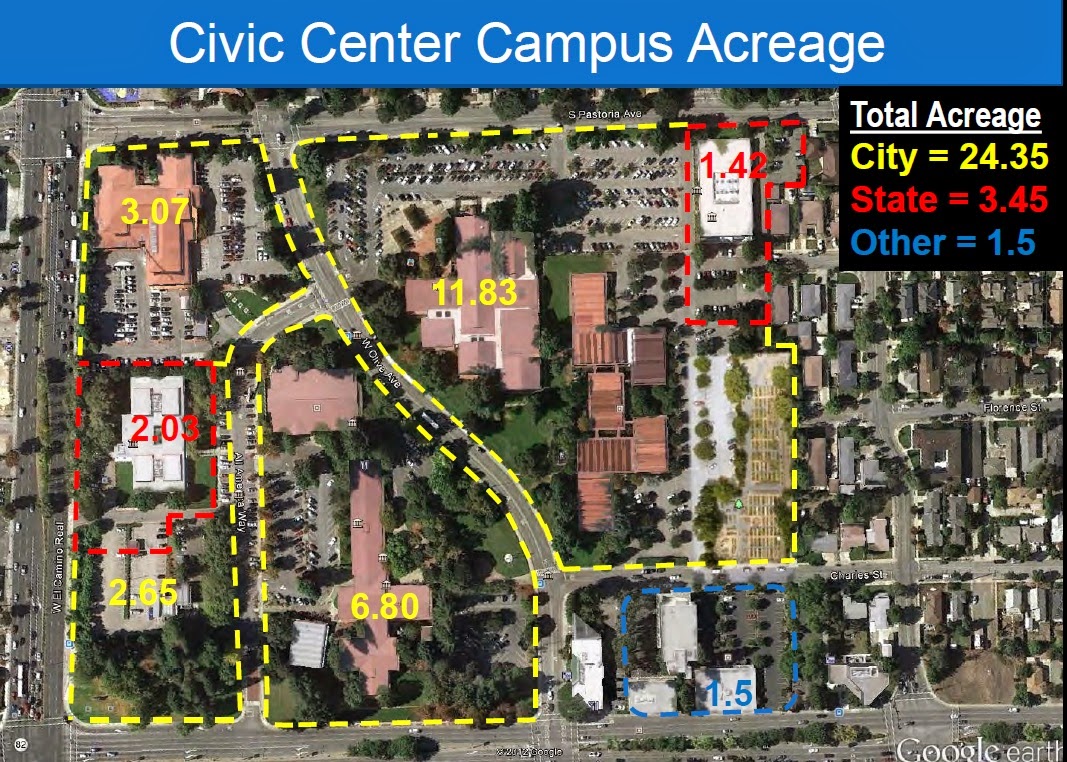 Next we see the allotment of property approved by the City Council for study. 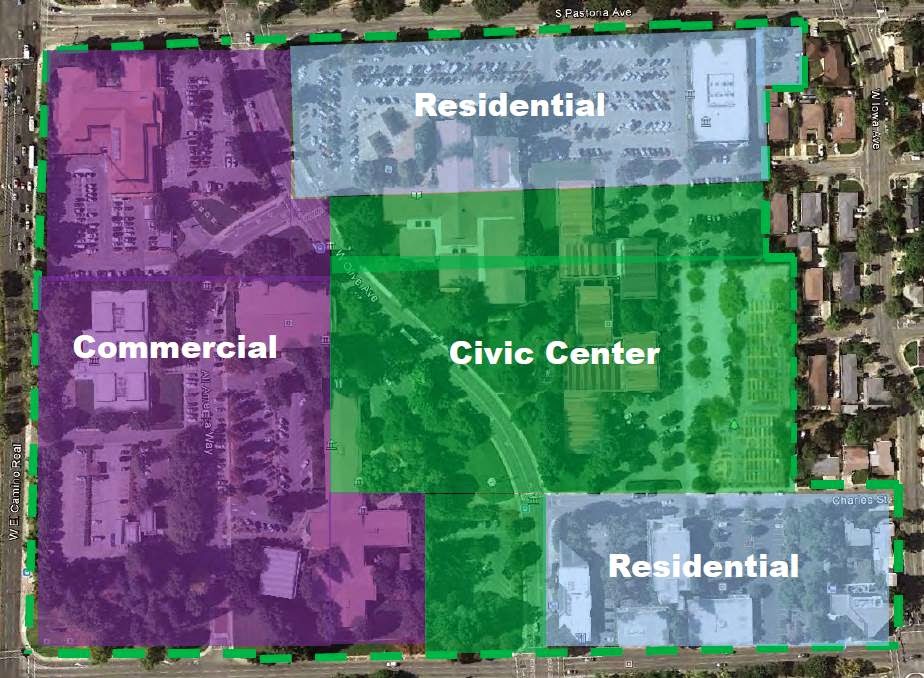 To determine how much acreage of the current Civic Center would be lost to development we took a look at a section that was as close to a rectangle as available (immediately below), blew it up, and put it into Microsoft Word.  There we measured it so as to make an estimate of the total amount of land that would be developed. 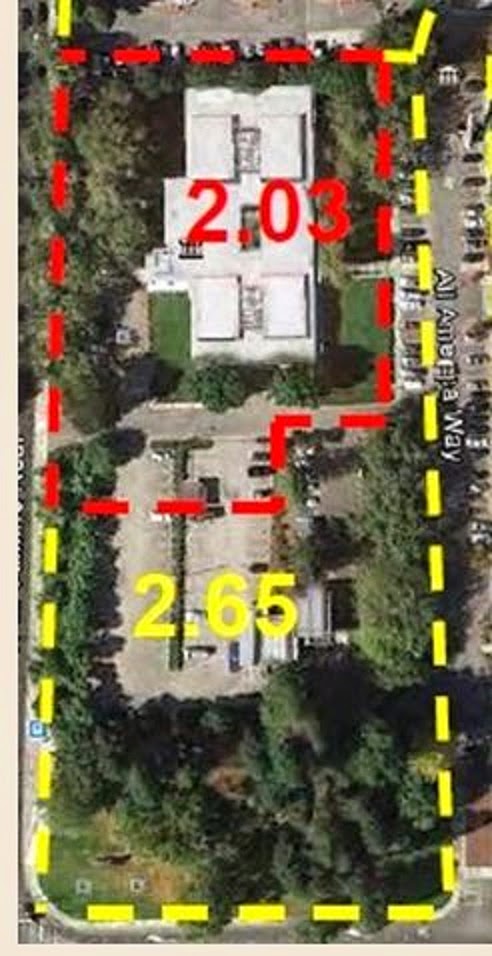 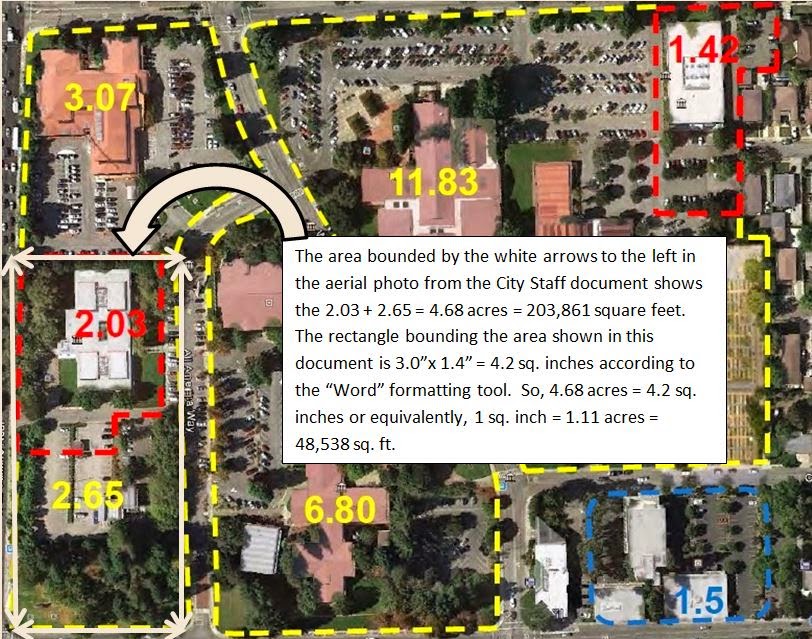 We then made rectangles surrounding all the other areas that would be developed as you can see below. Adding up all the rectangular areas bounded by the arrows gives 9.86 + 2.97 + 0.64 + 1.17 = 14.64 Acres.  That excludes the state owned building in the right side of the upper blue area marked residential.  It includes the state owned court house of 2.03 acres since that is part of the Civic Center.  One can reasonably expect that if a private developer can obtain it, so can the City of Sunnyvale. 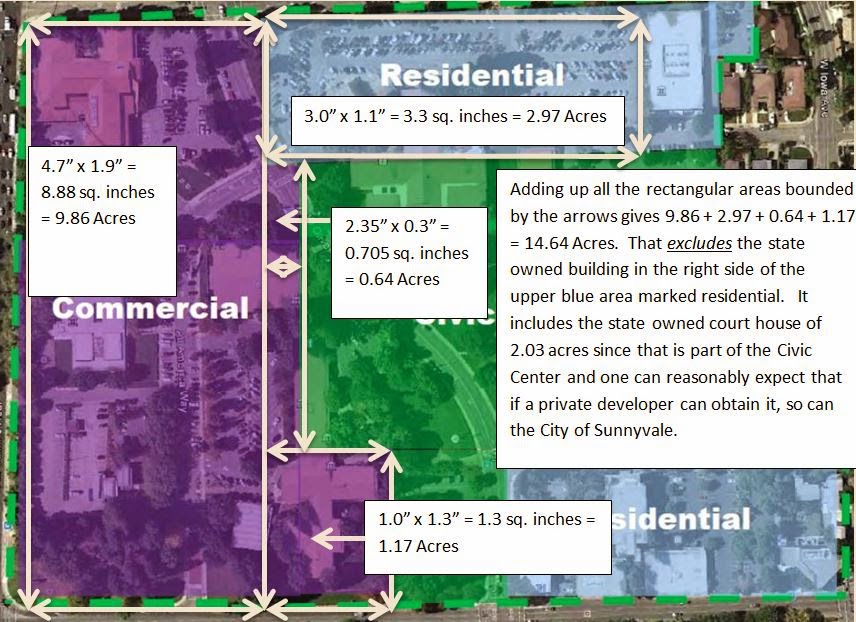 The question was raised how we know it is 14 acres to be developed.  The short answer is because that was what was announced at the City Council meeting in 2012 where this was presented, but since that was not recorded and minutes left out that and several other items of interest, we confirmed it independently ourselves.

Posted by Michael Goldman at 5:24 PM No comments: