To sign up for quarterly newsletters and important updates send your email address to: CSPGSinfo@yahoo.com  All addresses and names kept in absolute strictest confidence - not released to any person, government agency, or organization.

Yet more nice libraries built at a reasonable cost per square foot (SF).   To save download time, the pictures are smaller but if you click on any of them they will expand quite a bit. 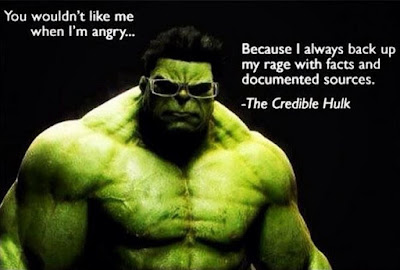 The City of Sunnyvale has engaged Anderson Brule Architects (ABA) to do the "needs" analysis of the Civic Center including library, city hall, and public safety building.  Their 2007 recommendation was for a monster library (on top of the community gardens) nearly triple the current library's size, tearing down the existing library (with all its lovely trees) and building massive underground parking - total cost $108M - approximately $1,000/sq.ft.  We are afraid ABA will again come in with an exorbitant cost leading to the unnecessary sale of prime civic land to pay for it.

Why the larger cost numbers in parentheses?  Because included in the cost is the very high appraised value of the land at almost exactly $3M.  Most people would not consider this a real cost if the city already owns the land.  The idea is that the city could sell the land instead of using it so that lost opportunity cost has to be accounted for.  In costing other libraries, this land value is negligible (at most 10%) and I ignore it in estimating the cost per Sq.Ft..  In this case it is 35% of the 'real' cost.  Since the comparison is to the cost estimated for the 2007 library bond which did NOT include the cost of the land (since Sunnyvale already owned the land) I subtracted out the cost of the land here when calculating the cost.  Hence, the parentheses to indicate the cost of the library with the accounting of cost of land. 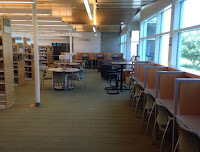 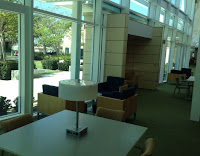 "[Library Supervisor Burke said] 'I've never seen a library that is more stunning or beautiful than this one,...

"The library's most visible architectural feature is a clerestory above the first floor, with windows that allow light to pour down into the rooms.
"The rooms are largely open, and will be separated into centers for teenagers, children, adults, homework, job skills, technology, study areas and meetings. There will be 38 computers, terminals for visitors to electronically check out books themselves, and lounge areas that will resemble a cafe.
"A public art project on windows facing Burin features art glass with kaleidoscopic designs that recreate historical Lawndale photographs.
"The new structure is more than five times the size of the existing, 3,200-square-foot library that was built in 1955."
Above excerpted from:
http://www.dailybreeze.com/general-news/20081121/lawndale-turns-a-page-with-dedication-of-new-state-of-the-art-library

Above CA Dept. of Finance audit includes only the 65% paid by the state.  The remaining 35% was paid by the County.  From:
http://www.dof.ca.gov/osae/audit_reports/documents/BondGCSLCountyofLosAngeles-LawndaleProp14February2010-1.pdf

Not much to say about this small rural branch library except how nicely detailed all the costs are in the official CA state audit.
The above audit includes both the 65% CA supplied bond money grant and the 35% paid by the county.
Above audit from:
http://www.dof.ca.gov/osae/audit_reports/documents/FinalReport-CountyofFresnoTranquillityLibraryGrantAuditweb.pdf

Architectural firm of record is Fresno County Public Works & Planning which employed Loyd Rolle as architect who apparently has no web site.

The Long Beach Public Library System has 12 outlets! - 1 main library and 11 branches.  This for a city of 462,000 people - almost exactly 3 times the population of Sunnyvale - in 50 sq. miles - roughly 2.5 times the area of Sunnyvale.  Sunnyvale would need 4 outlets to be equivalent. 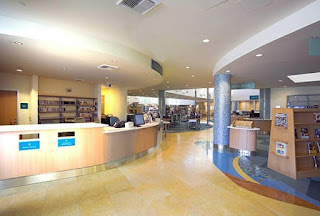 Posted by Michael Goldman at 11:22 AM No comments:

All are far less than the nearly $1,000/sq.ft. estimated by ABA for a new library in 2007.  ABA is now doing the "needs" assessment for Sunnyvale's City Hall, Library, and Public Safety Building.

We fear ABA will assess Civic Center "needs" as so expensive that there will be "no choice" but to 99-year lease half the Civic Center to developers to pay for it.

Joint use with Inderkum HS and American River College 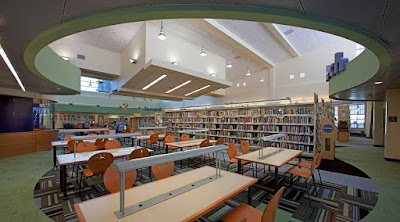 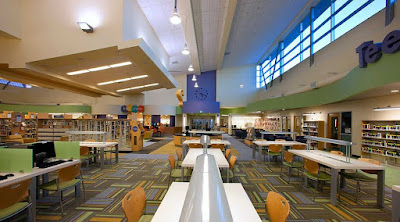 City of Sacramento provided $3.77M and CA provided $7.1M = $10.8M for a 23,000 sq. ft. library as seen in the following excerpt from the CA audit document
http://www.dof.ca.gov/osae/audit_reports/documents/FinalReport-CityofSacramentoCaliforniaStateLibraryGrantAudit.pdf

The following CA Dept. of Finance Audit shows a total cost of  about $8.7M.  The City did NOT use all the funds awarded them under the grant!

Above audit pages excerpted from:

Architect's portfolio here:
http://www.wlcarchitects.com/portfolio/
"..the project was awarded funding from the 2004 State Library Bond Act with building construction cost limitations of $210.00 per sf" from above link.

"The new  23,000 square foot library, located in an educationally and economically disadvantaged area, will serve as a teaching and learning center that will meet the education needs and improve the functional literacy skills of the South Oxnard Community.  There are 18 schools in the area with many of them being within walking distance of the new library."  From: http://www.library.ca.gov/newsletter/2007/2007summer/new.html

As can be seen from the CA state audit excerpted here, the money includes everything - not only construction costs which are 82% of the total project cost.

Above excerpted from CA Dept. of Finance Audit:
http://www.dof.ca.gov/osae/audit_reports/documents/Prop.14LibraryBondsCityofOxnard.pdf

Part of a new Civic Center: "The entire project was certified at the LEED Gold level. The Library provides program areas for: adult reading areas, a teen area, a juvenile and early childhood area, a homework center, a 220–seat community room and all the related supporting function areas." From:
http://www.harleyellisdevereaux.com/projects/calabasas_civic_center_library#learn/libraries 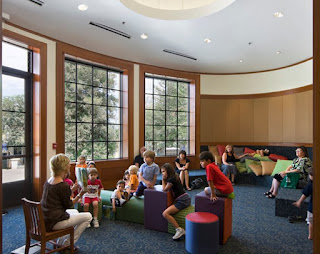 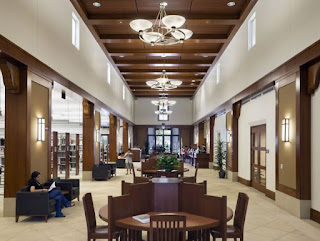 The CA audit below shows a total cost of $12.6M ($8.2M from state, $4.4M from City) for 23,332 Sq. Ft. or $540/ Sq.Ft. - following excerpts are from CA Dept. of Finance document:
http://www.dof.ca.gov/osae/audit_reports/documents/FinalReportCityofCalabasasStateLibraryGrantAudit.pdf 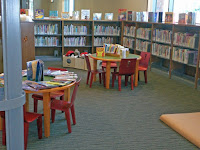 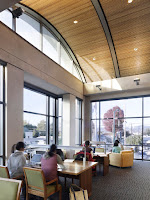 Pix from links at:
https://libraryarchitecture.wikispaces.com/Alameda+Free+Library,+Alameda,+California+(building)

Above excerpts are from CA Dept. of Finance document:
http://www.dof.ca.gov/osae/audit_reports/documents/CSL%20City%20of%20Alameda%20Library%20Construction%20Grant%20Agreement%201008.pdf

Posted by Michael Goldman at 2:35 PM No comments: