The suggestion of the sale of part of the Civic Center (where the public library and city hall are) was a source of dismay so Deborah Marks and I worked to present alternatives.

One of the alternatives we have suggested is the sharing ("joint use") of public school libraries with the Sunnyvale City Library.  Costs would be shared so the schools would have lower costs and the libraries would get much more use by the public (mostly kids).  Here is a presentation before the Sunnyvale City Council on March 5th, 2013 on some of the aspects of joint use of public school libraries with the city library (slight pause before I start talking - sorry).  It is also available on YouTube at:
http://youtu.be/54LKGFpVKCU
(Slides used are shown below)

Links to references to the proposal to sale/lease the civic center and related issues are collected here:
http://cspgs.blogspot.com/2012/10/links-to-information-on-salelease-of.html

Slide 1 continued an argument that the amount of money involved is roughly that of the entire city budget and should not be taken with a simple city council vote.  The voters of the city should decide such a momentous issue.  Since only 50%+1 need to approve a non-tax issue, propositiopn 13 doesn't come into it.  The $100M library bond proposal that got 59% of the vote was only for a library, not selling off major parts of the civic center. 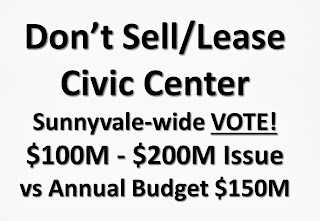 Slide 2 was excerpted from the city document showing the proposed sale of various parts of the Civic Center showing what would be sold and retained. 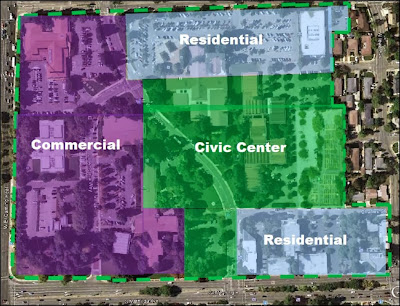 Slide two showed the area within 2 miles of the current library (red) and two proposed libraries.  The existing library would be demolished. 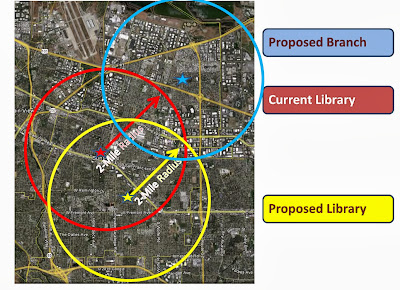 Slide 4 showed the proposal for joint use libraries with a smaller radius of "use area" since the thought is that it would be more for kids than adults who would be more likely to walk to the library. 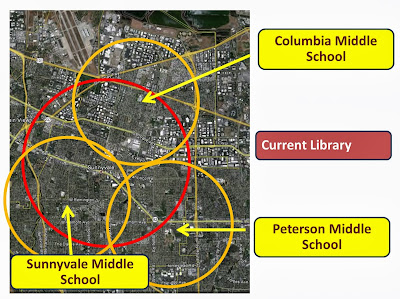 
The following is the text of the speech which Deborah Marks gave before the City Council during Public Comments.  Michael Goldman followed with more examples of libraries with additions.  To see both presentations just google "Sunnyvale City Council Meetings Video" and go to "Watch Council Meetings Online."  Our presentations are about 10 minutes into the start of the meeting.

After having talked to many people and having seen the buildings at the civic center, I would like to suggest the following.

We know that the city doesn’t have the money to build two or three new buildings.  We know that the bond measure for $108 million for a new library did not get the 2/3’s majority it needed in 2007.

We know that the buildings…city hall and the library….are capable of being repaired or added onto.   In both cases this could be done and provide more space for the library patrons and city employees at a comparably lower cost to the city than new buildings.  This cost comparison was done in a feasibility study for the city in 2002/2003.  A branch library is being considered at the Lakewood Park Site which could help to solve the space dilemma at the main library.  An example of a attractive addition to a library can be seen here in Schenectady, New York.  It illustrates a combination of the new with the old.  It is an addition of 6700 sq. ft.  for a children’s area and for technology services.

The immediate problem seems to be with the Office Center on the north side of Olive Ave…. between the library and Union Bank… and the South Annex behind City Hall.  They are in dire need of repair.  A new building could be built at the site of the Office Center to replace both.  If it were two stories high but in keeping with the style of the older buildings, it would fit into the setting and provide more space.  An example of such a building would be the Packard Foundation in Los Altos.  Perhaps this could be the new city hall and the old city hall could be used for the overflow at the Public Safety Building.  The construction could be financed in other ways than selling or leasing the city’s land.

Money could then be set aside for additional new buildings in the future.  As I understand this will be considered at a study session to create an ordinance to set aside amounts of funds for large city infrastructure projects.

Just as home owners have to budget and save for future projects in the upkeep of their homes, the city must put aside money for repairs and construction.  Renovating and building at the civic center can be done in phases and, that way, ensure that the civic center site will be maintained for future generations.

Posted by Michael Goldman at 9:52 AM No comments:

On December 4, 2012 we were invited to a tour of the Civic Center by the Assistant City Manager, Robert Walker.  This is mainly due to the emails you have written to the city council which Mr. Walker reads and takes seriously.  He pointed out the problems with the city hall, south annex and office annexes (“rabbit hutches”) across from the city hall.  Mr. Walker also gave us three studies commissioned by the city in 2002, 2003 and 2009 regarding the civic center and possible renovations to the site.  A report of the tour can be seen at our blog http://cspgs.blogspot.com/.  The studies are available at our NEW Website(!).  This can be reached by typing in: CSPGS.com (no “www” in front) which redirects to https://www.sites.google.com/site/citizenssunnyvalepandgs

One reason for a website was to provide a central location where anyone can go to download the many files of information and presentation that we have accumulated but can’t post on a blog.  These can be accessed at: https://www.sites.google.com/site/citizenssunnyvalepandgs/resource-center

We started out with the 3 documents we borrowed from Mr. Walker which are outside experts’ analyses of the Civic Center issues over the years.  We scanned them in by hand since Mr. Walker did not have electronic forms.  One of the key findings is that the traffic generated by the proposed massive commercial development of the Civic Center would double traffic delays from about 35 seconds per car to 65-75 seconds degrading traffic congestion to the lowest possible rating of F.  More on that later.

The web site is a work in progress.  We are using a template with a lot of sample features pre-filled with obscure Latin.  We would welcome any help in polishing it up.

We proposed to the City Council that a cost/analysis study of a small scale development of a new slightly larger office building to replace the Sunnyvale Office Center (AKA “rabbit hutches”) be considered as a study issue for this year.  Michael introduced this study at the City Council Meeting on January 8, 2013.  Decisions as to which study issues will be selected for the year considered by the City Council on February 1, 2013.  Our proposal for a study issue was selected for further study which required 2 council members to vote for it but ultimately was voted down by the board because City Manager Gary Luebbers claimed that it would be considered in a broader study.

Flyers are still being distributed in the city but if anyone would like to volunteer to help with the distribution, just send us an e-mail.  We certainly could use more help.  Financial contributions to defray the expense of the paper and the printing ink would also be welcome.  We are in the process of adding a paragraph to the flyer to clearly state that our main issue is to preserve the geography of the civic center as it is.  That we are also making suggestions to the city as to the possibilities for renovation to the buildings or, if necessary, for new construction.    The revised newsletter can be seen at our blog.

As an example, the new Lucille and David Packard Foundation building in Los Altos would fit perfectly into the current civic center site as a replacement for one of the buildings.  It’s located at 343 Second St.  You can see it at http://www.packard.org/.  A video is available at http://vimeo.com/45338217#at=0.  We will be suggesting this type of construction at a City Council meeting if the replacement of buildings is necessary.

Posted by Michael Goldman at 12:49 PM No comments:

A Tour of the Civic Center

On December 4th, 2012, we were invited by the Assistant City Manager, Mr. Robert Walker, to tour some of the buildings at the Civic Center.  Mr. Walker wanted to show us the condition of the buildings and the space problems facing the city employees.

﻿﻿﻿﻿﻿﻿﻿﻿﻿﻿﻿﻿﻿﻿There was a problem with water leakage into the room with the files so the floor had been built up.  Upstairs again, we were able to see the offices beyond the Building Permit area.  In square footage some of the offices were somewhat lacking.  In one larger area, cubicles had been set up.

﻿﻿From there we went to the South Annex which was put together in 1994 from seven modular units as temporarily added space.  Mr. Walker pointed out as we walked up to the building that the skirt of the building (where the building meets the sidewalk) was beginning to rot.  Inside he explained that the restrooms were a problem because they are in immediate adjacency to the offices.  Two offices were closed due to termites.  At certain times, one can actually see them in full activity.

We then walked over to the Sunnyvale Office Center which the city had purchased in 2001.  These are affectionately referred to as the "rabbit hutches."  Not all of the offices are occupied.  Even those which are occupied are not all being used by city workers.  Some have been rented out privately. Mr. Walker could not tell us how many city employees were in these office spaces at the present time because the numbers fluctuate according to need.
Mr. Walker said that the problem is not really space but rather the arrangement of that space.  The City Manager would like to have certain offices in the near vicinity, ie.the same building.  As is now the case, the employees are sometimes walking across Olive Ave. to see the City Manager.

At the Office Center we were made aware of the modulating roof which would be extremely costly to repair, of the wood rot and of the fact that the complex is not ADA (Americans with Disabilities Act) accessible.  The restrooms are very simple but functional.  We were led into the basement which has some leakage problems as in the basement of the City Hall.  We were shown a duct which has holes it it where water and muck accumulates.
﻿﻿﻿﻿﻿
﻿
﻿﻿


It should also be stated here that during a meeting of the Neighborhood Association chairmen/women in the fall of 2012, Mr. Walked stated that the city had neglected to repair the buildings at the Civic Center in the last ten years.  This has been due to the indecision by the city as to what to do with the Civic Center...renovation or new construction.

Posted by Michael Goldman at 1:49 PM No comments: