Before showing the scenarios, a little history for context.

Sunnyvale has been making plans to remake the Civic Center for a while now.  Here is one from 2003 by an architect the city hired.

The above picture is from the February 2003 Civic Center Redevelopment Feasibility Study - front cover below (click to enlarge): 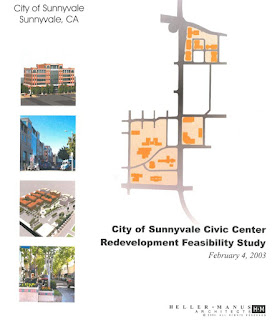 That was 2003 and if the City Council of the time had gone with that simple plan, there would have been no need for a library bond issue, and all public safety officers and city employees would have had lots of office space (more than needed since staff levels are lower now than in 2003).

So here it is 2015, 12 years later and no closer to expanded library facilities, or more room for public safety, and city staff.  "Redevelopment" is now called "Modernization". And Sunnyvale has spent $400,000 for Anderson Brule Architects (ABA) to pretend they are getting public input when it has all been decided before hand.  On to the show.

Before we get into the scenarios presented by ABA we need to present one proposed by City Council Member Jim Davis, a former public safety officer in Sunnyvale.  We support this as incurring the least disruption to the current Civic Center and being the least costly and so least likely to serve as justification for selling or 99-year leasing parts of the Civic Center.  Existing buildings are in red.  A new city hall and an add-on to the library are in blue. 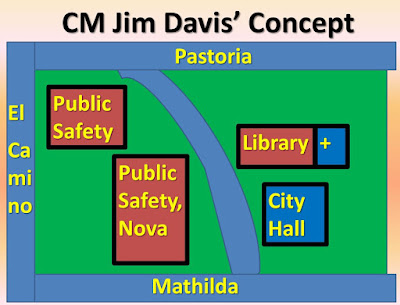 The city of Sunnyvale sponsored a set of 3 workshops run by ABA to receive public input.  There was one for everyone to give their input over certain issues such as where to locate a new library or a new public safety building (Police and Fire dept.)

At this first one, a lot of people said they liked the library as it is and asked why couldn't a simple add-on suffice for a larger library (it has been expanded several times) and likewise for city hall.  This clearly was not what Pamela Anderson Brule of ABA wanted to hear (no fat commissions there) so at the end of the workshop she declared that the participants weren't representative of the people in general leading everyone to wonder "if we're not representative, why hold a 'workshop' to ask our opinions?"

The workshop for the commissioners and boards on August 26th and the 3rd Community Workshop on Oct. 3rd were limited in scope.  Participants were invited to plan out a scenario for a new Civic Center but with certain constraints they had to include such as selling or 99-year leasing parts of the Civic Center to private development to pay for it all or to allow for a certain (large) amount of underground parking.  Deborah and I attended the one for commissioners as observers and saw it was a rigged farce.  We debated boycotting the one for the general public but figured that would play into the hands of ABA and the city.

Here are some of the scenarios drawn up by the general public and the corresponding scenarios as done by ABA.  The first one is an "Open Space Scenario" from the public followed by one from ABA.

Clearly, ABA fronts all the buildings along El Camino and Mathilda, and does all new construction while the public wants to keep greenery along the roads and reuse existing buildings.  We all are concerned with recycling cans, bottles, paper etc., but re-using buildings doesn't generate much in architectural fees so ABA minimizes re-use.

Below are more scenarios on the left drawn up by the public.  ABA's versions are on the right.  Click on any image to enlarge it.

In every case, ABA has added (very expensive) underground parking, and moved buildings to front on El Camino thereby removing that refreshing row of trees that breaks up the visually exhausting string of buildings growing ever higher along that street.  ABA has also extended out to Mathilda more buildings and included more retail space when that scenario called for it.  The net effect of ABA's modifications is to make it all much more expensive and destroy the greenery currently seen along El Camino and Mathilda.  The intention apparently is to make it all so very expensive the city will be "forced" to sell or 99-year lease away much of the Civic Center to a developer to pay for it. 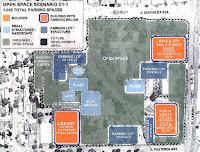 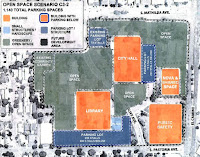 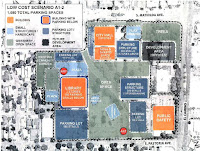 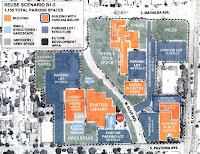 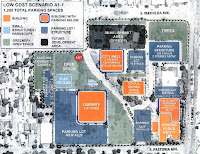 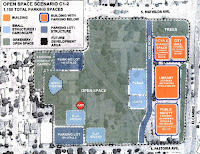 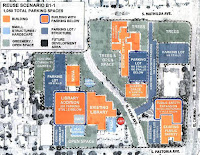 Part 2 with $ cost can be seen here:
http://cspgs.blogspot.com/2015/12/civic-center-change-scenarios-part-2.html

Posted by Michael Goldman at 10:43 PM